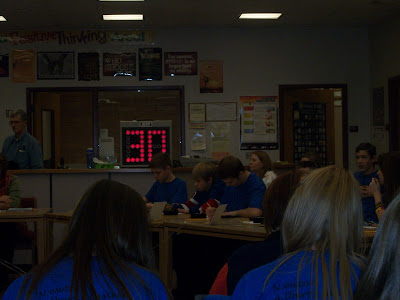 Tyler made the N.A.L. or National Academic League , team this year at TH Bell. He has had so much fun and learned SO much. It's been AWESOME! Yesterday was the last regular season game and it was a deal breaker for the Bell team. If we lost we were done. If we won we went on to the playoff's. TH Bell came to play! They lead from the beginning, and despite some big mistakes by the judges were still leading towards the end of the game when all of a sudden things started to fall apart. A boy on our team answered his question right but the judge said it was wrong. Then the next boy on our team buzzed in on his question and got it right but then the kid on the other team yelled that he had buzzed in first and the even though it wasn't even his question (it goes by seat) the JUDGE GAVE IT TO HIM!! The library was in an uproar. Parents were upset. The coaches were upset and the judges were confused and obviously stressed. The kid on the other team was arguing with and yelling at the judges.....and out kids sat quietly and respectfully at their table. They would whisper to each other but they were respectful. Finally things were decided and, thankfully, in our favor! We won! We were all excited and relieved that it had ended the way it did, but for me the most important and impressive part of the whole meet was how our kids acted. They were obviously upset, and had just as much to lose as the other team, and yet they stayed respectful and did what they had been taught to do. THAT to me was worth even more than the great win! Next week is playoffs AND basketball clinic leading up to tryouts, so we'll see how that all goes.....but for right now I am so happy with how NAL has gone and how Tyler has done!!! GO BELL! 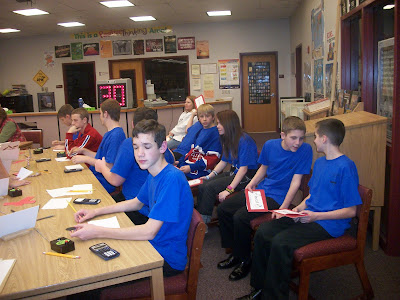