When Tyler had his surgery earlier this month the Dr. warned him that he might be ornery and mean when he came out of anesthesia. After the Dr. left the room Ty asked if he would really react that way. He was really worried because he can't imagine being mean :) I told him not to worry because there wasn't a mean bone in his body. Well, that was proven right when he woke up and could only worry about who was taking care of his brothers:) 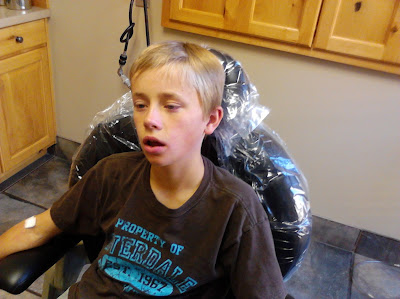 Well this week when Mike had surgery I was curious to see how HE would react. See, Mike doesn't have a mean bone in his body either, so I figured he would either be worried or silly. When they wheeled him back into the room he was still out cold, but before long his eyes opened and.....he puckered up his lips and said in a very slurry voice "I need kisses". I burst out laughing. Then I kissed him, he said "You are so pretty" and he went back to sleep. About that time his Dr. came in to tell how things went and to talk about his recovery. While we were talking Mike woke up and said "MORE kisses!" and made big ole fish face kissy lips. I had to bite my cheeks. I held up my finger and he went back to sleep. After the Dr. left the nurse came in to bring him some water. He asked me if I wanted a drink and Mike piped up and said "What do you have that is caffeine free and diet?" the nurse laughed and said "um, water?" so Mike said "Great! A great excuse to drink Dr. Pepper! You do have Dr. Pepper right?" and fell back asleep. The nurse and I just laughed at him. When he brought the drinks back he said "so, uh you might want to help him drink this" :) Mike says that the first thing he remembers is waking up while drinking Dr. Pepper. I was trying so hard not to laugh. He kept falling asleep and waking up.....each time asking for kisses. He's so funny. He is always so sweet and nice to me that it shouldn't be shocking that even when he's drugged he's sweet. This is the third big medical thing we've had this November.....they say these things come in 3's.....Let's hope this is it! 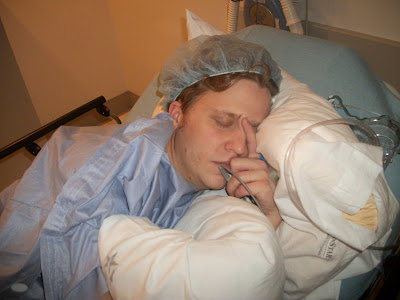