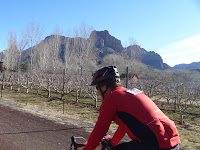 February 25th 2012 was the Zion Country Early Spring Century put on by Bike 2 Bike. Last year, after the Tierra Bella Century, ULCER century, and Cache Valley Century, the season started wearing down, and in typical Mike style, I started putting on weight again and feeling demotivated. I knew I had to pick a century ride and get rigistered, and this one looked good. It was a bit of a stretch, because of birthdays around the same time in the family, but my loving wife consented and understood my need, and so I signed up. This gave me months to fantasize, map the ride, "fly" it in Google Earth, and read every blog posting anyone out there ever wrote about it, thus surviving the winter as I sometimes commuted in the cold and other times endured basement penance on my rollers (which, btw, is way more fun than a fixed trainer, so long as you don't mind falling over when you get distracted, which happens fairly regularly, and your children can sleep through the sound of the house reverberating as the roller sends vibrations through the floor in your sprint intervals). During this time, one by one, my dad, Brian (my college bud), and my bros Danny and Paul signed up to go too - the more the merrier! 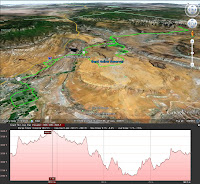 To make a long story short, registration for the ride gave me the motivation I needed to hold back and not stuff myself to the point of stretch marks on Thanksgiving, nor to eat chocolate till it's oozing out through my pores over Christmas, and to keep training through the winter. The net result was that I went into February weighing the same as I did at the beginning of August, and just as fit. Had some great rides too - solo ride from Hurricane to Toquerville, Quail Creek and around Sand Hollow; Antelope Island with bros and dad, North Ogden Pass and Trappers Loop with Brian and Drew - it was GREAT! If you think riding in the cold is no fun, you just haven't dressed right - it doesn't have to be any less comfortable than skiing. LOVED it!-thanks in no small part to Santa and my wife who gave me sweet barrier clothes for Christmas, and then adding later the thermal jersey from my Dad - thanks all of you! I love organized rides, in no small part because, in addition to the party on bikes that is ride day, you get all the anticipation and all the awesome training rides leading up to it.
So ride week approached and I admit, I pretty much tossed dieting to the wind and ate what I wanted for two weeks straight - Cafe Rio Baby! and apple fritters, and chocolate chip cookies - mmmmmm...I called it Extreme Carb Loading. Put that together with a soccer tournament for Tyler in Mesquite the week before the ride, and playing catch-up with woodwork the week of the ride, and I pretty much didn't train for two weeks straight before the ride and put back on two pounds. And unbeknownst to me at the time, I picked up a cold virus which had me in the pre-symptoms weakness stage of the cold on ride day...

I enjoyed the drive down with Paul, the pizza dinner with my parents, Danny, and Melanie, and a good night's rest before the ride. Ride day dawned sunny and brisk- gotta love the desert where it can be 30 degrees in the morning and 70 in the afternoon. Otherwise, we couldn't have asked for better weather for the ride. The hill up out of Hurricane was awesome, and then we cruised up to the park entrance. Pacelines are wonderful things, and we were having a great time. The rest stops were good - plenty of granola bars, candy and nuts and raisins, fig newton bars (the fig bars were my favorite rest stop food on this ride) and sports drinks. 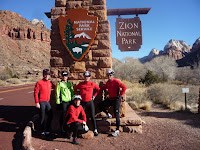 The ride organizers did a fine job painting arrows at turns and having rest stops well-run. My only complaint is that "lunch" was along the ride, at the 2nd rest stop. It was Subway sandwiches, which is great, but I prefer to eat lighter energy foods till the ride is over and have lunch later at the end of the ride but that wasn't an option. Instead, we could pay extra for a post-ride BBQ which was just OK. It seemed like a way of milking a little extra $ from the participants rather than just having one post-ride meal included in the cost of registration like the other rides I've done. I would have preferred to have the option of my subway sandwich at the end of the ride. Like I say, that's my only complaint about the ride. I thought that Bike 2 Bike did a good job, and hope to attend more of their events. If only the Heber Valley Century wasn't so close to my wedding anniversary. I can just hear the conversation now if I ever register for that one: "I promise, I love you more than my bike, but I have to train..." Yeah, probably best I don't register for that one any time soon unless my wife wants to join me on the ride...hmm...I think, what with Tour de Cure and RACER Century coming up together this year, she's spoiling me rotten already! I'm SO excited! She seriously rocks!
The ride was beautiful too - sunny, gorgeous, and spectacular scenery as you would expect near Zions. It was just a great ride! By lunch it was warm enough to shed the thermal jersey but I'm not crazy - I kept the leg warmers on. We rode down (haha ok up and down, up and down, and then up and down some more) into St. George. It was fun to be cheered on by Brian's family as we passed his parents' winter home. By this point I was starting to tire (thanks to the cold, I now see), and Danny got way ahead on the ride back up through Washington. Paul rode ahead to catch him and missed a turn. I called Paul's phone and brought him back, but we didn't know which way Danny had gone. After about 10-15 minutes we decided to trek ahead the right way and hope we found him, so we got back on our way. Sure enough, we found him at the next rest stop, feeling his oats about smoking us ;) and giving the ride organizer helpful advice about arrows that are hard to see.

At this point, all that was left was to ride along Sand Hollow and back into Hurricane. Paul and Danny were tired of waiting for my sick butt, and ditched us to stretch their legs out a little. We hit the last cat.5 hill up on the east side of Sand Hollow, at which point Dad said not to worry about leaving him, and then left me too. Thanks again, Brian, for the company. I'm really glad I had you to hang with as I limped along for the last 10 miles or so. I dropped my leg warmers down around my ankles - didn't want to stop, despite the 80's aerobic dancer look - and kept on my way.

I was surprised to get to the end of the ride and see Dad there, but no Danny and Paul - apparently they were directed on a detour by mistake - HA HA HA SERVES YOU RIGHT, SHOWOFFS! You're lucky I had A COLD! This ride was a good one. Much harder than the ULCER - not quite as hard as the Tierra Bella, though the amount of climbing was similar, just spread throughout the ride. It wouldn't have been quite so challenging if not for the cold virus, so I do have a feeling of wanting to do it again this time, but there aren't a lot of century rides in February to choose from, so maybe I actually will.

Paul and I enjoyed a nice ride home, and then all that was left was to milk the post ride euphoria to the max by sharing photos and videos, buying the pictures from Zazoosh, picking out music, and putting together the ride video/slideshow. Thanks again to Danny, Paul, Dad, and Brian for the great ride, to Bike 2 Bike for putting it together, to Hurricane and neighbors for permitting the swarm of bikes, and to Mom, Melanie, Clerie, Erin, and Liz - the wives who so lovingly enabled us to indulge our obsession and ride!
Posted by Mike's Woodwork By Design at 9:00 PM