Well, two weeks after the Tierra Bella my riding intentions and healthy-eating intentions were proving to be inadequate - I had put back about five hard-lost pounds. As my brother said, I needed some "authentic accountability" like I had found in being registered for a century ride. My wife, lovingly, and understingly agreed and I registered for the Utah Lake Epic Century Ride, or the ULCER or U.L.C.E.R. or whatever you want to call it. Just don't try doing a google image search for ULCER - gross. 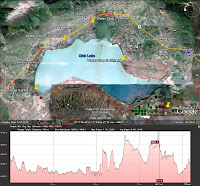 Anyway, I figured I didn't need to do so many long training rides for so long, I just needed to keep up commuting and such and then do a few longer rides close to ride day, so it wouldn't be as big an impact on my family this time. At least that was the goal. It turns out I was mostly right. I did a longer ride a couple of weeks before the ULCER and was fine, so my training plan wasn't so high-impact. What drove my wife nuts was how I couldn't get over coveting a road bike. I started saving, but figured it would be a year or more till I could buy the bike I wanted, but then a killer deal came by and I got a Specialized Roubaix Elite Compact, and love it! That just increased my obsessive excitement for the ride.

Then ride day came. Matt also had a soccer tournament so we slept at Grandma's house in Draper and then went our separate ways in the morning. It was a little brisk, but the excitement more than compensated for it. I got there, all dressed up in my Tierra Bella jersey and Italico bib (my Dad and Brother loved the view when I was pulling the paceline). Then, of course, I realized my drivers license and car key which I had put in a ziploc bag in my jersey pocket weren't there anymore - did they fall out in the Honey Bucket, at my car, at the registration table, or somewhere in-between? After 15 minutes of panic I found them at the registration table - PHEW!

Here let me give a little tribute to my Dad - at age 62 he did his first century in April. Then in may he crashed - broke his collar bone, three ribs, and punctured a lung. With a whole erector set in his shoulder, he was finally turned loose to train around July 24th, and still thought he'd try this ride. Amazing! 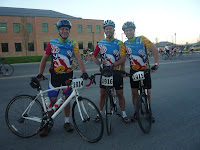 e met up, took some pictures, and got ready to start. The timing chip thing was cool. My favorite thing about the start was the sound of popcorn popping as 200 or so riders all clipped into their pedals all at the same time. Something about the start of a ride is just so tense - I knew I could do the ride this time, but still... We rode out under the inflatable timing gate and got on our way.

This event was really, really well organized. There were a lot of turns at a lot of intersections for the first 20 miles or so, but we were able to just tear through them, since probably every cop in Utah County was along the route stopping traffic for the ride. It was really cool - I loved cornering at speed, attacking the overpasses, which were the only hills around, and just cruising at about 20 mph. We let Dad choose the pace, and Paul and I took turns pulling. Our first rest stop came along so fast.

Hydrating, I had to stop, and got to enjoy the fun of a 3/4 zipper jersey and bib in a Honey Bucket. I felt like Tommy Boy changing clothes in the airplane restroom. Also, my legs were shaking from the adrenaline, not exhaustion, cause we were so excited and having so much fun!

We continued to enjoy the ride south along the east side of the lake. I really appreciate the communities that plan for, stripe, and sign bike lanes. It makes a huge difference for cyclists - it's so much safer, and comfortable for the bikers and I think for the cars too. We rode along-side and talked with a lot of interesting people. I love the organized ride atmosphere - a party on bikes. Everyone's happy, everyone's doing what they love. It's just great! The morning was gorgeous, and the route was so flat. We were cruising and having a blast. I got brave, and took out my phone (ahh, the comfort of having a protection plan ;)) and took a few picutres while we rode.

he ride around West Mountain was nice - a little vertical to shake it up a little, and much prettier than I thought it would be, never having driven there before - orchards, farms, wetlands, and the lake - it was great! Oh, and of course, good cookies at the rest stop. My sister says she likes the boiled potatoes they had at the Tierra Bella. Crazy! When you can have chocolate chip cookies?!?! As we turned south, we had quite a headwind - enough even to negate the benefit of a 3-4% downgrade!

Then we turned west and it was in our faces still. We stopped for water, and to call Matt and see how his game went. Sadly he lost, but it was a great tournament. AND that meant that I had hope of a fan club at the finish line. Oh I was hoping! My dad rode ahead, so Paul and I got to ride at our own pace to catch up. Into the wind, I pulled, and Paul kept up, but just barely - a nice road bike is OH so nice! And I know it's not "cool" but my tight cycling clothes are definitely justified!

After we turned north again, the wind was at our backs more often than not, which was nice. Only by now it was hot, and the rest stops along the west side of the lake were out of water. We had to budget our drinks carefully. The ups and downs along the west side were fun. My dad thought he'd attack on the downhills, which was fun. Paul fell behind - I used "taking care of dad" as my excuse so I didn't feel too guilty for ditching him. He did catch up once we were on the flats again. Then I got a phone call that made me happy - my fam had made it to the finish line. Paul and I decided we would sprint for the finish in a Tour-de-France style showing-off way. I was so excited! We found a spigot at the park where the last rest stop was and hydrated ourselves again.

It was kind of sad that we were so close to the end - the ride went so fast, and did not feel like 100 miles! Taking it slower, at my Dad's pace, helped, I'm sure, but still, it was fun to relish the last few miles rather than just survive them. We wound through the Lehi streets past Thanksgiving point, and turned around and came from the north. 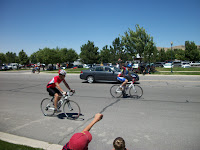 Then we saw the finish gate. I shifted up, stood up out of the saddle, and attacked - ZOOM! I love my bike! My boys were way impressed that I passed two cars who were driving down the road. I went through the start gate, and almost ran over the volunteer waiting on the other side handing out window stickers - she wasn't expecting a sprint-speed finish, I guess - SORRY! 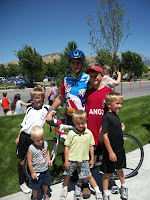 Then for the fun - my adoring children surrounded me with hugs and smiles, and then, of course, I had to get the 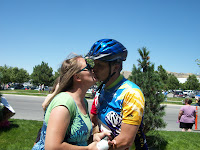 In the end, our time was 6:10 moving time, 7:07 total time. I felt really good about this, considering that it was 2:50 faster than the Tierra Bella, and we weren't pushing it either. I want to try, maybe next year, to break the 5-hour barrier on this ride. I was very satisfied, and a little proud that I felt like I needed a longer harder ride to get tired. Such a great day! Thanks again, Liz, for supporting me for another one of these! Oh, and once again, I lost another 15 pounds in training. Three weeks till the Cache Valley Metric Century with my sexy sweetheart! 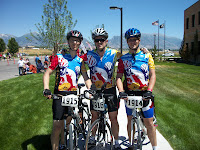 Posted by Mike's Woodwork By Design at 10:22 PM