The Best Kind of Woodworking Projects 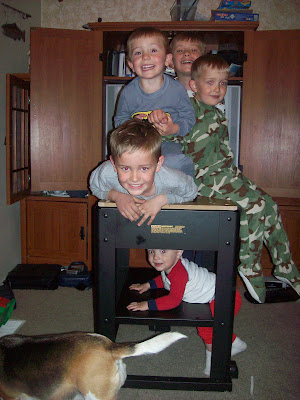 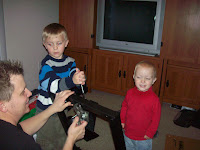 Making my chess board was cool. Making Liz's segmented salad bowl and serving bowl set was even cooler. I enjoy lots of aspects of woodworking, woodturning especially, but my favorite part about working in the shop is working with my helpers. There is a funnel spider that lives in the window sill behind my lathe. Luke wanted me to kill it, but I have a policy against killing the nasty creatures when they're not indoors because they eat the other bugs that kill my plants, so I told Luke we would leave him alone. Now Luke calls him "yours friend spider." I was worried when it of course died in the winter that I wouldn't get a replacement in the spring, but we're good now - hiding down its tunnel with its legs crouched up like Shelob on Lord of the Rings, Mine friend spider is back. 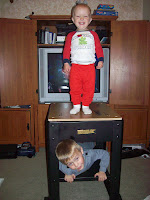 Today was another fun woodworking moment - putting together a new tool stand/portable bench with my helpers, and then of course, product testing by the same helpers. Thanks, boys, for the moments I will treasure more than anything I ever make in my shop. Making pens is cool. Making bowls is cooler, but the most enjoyable, most rewarding, and most important is also my biggest project - making men.
Posted by Mike's Woodwork By Design at 9:17 PM

And fine men they will be! Kudos to you for patience in allowing them to help with your "hobby."

i'd say you're doin a great job too. They are the cutest, and best boys. and i think youre the best kind of dad. (Liz still gets the Brownie points for dealing with 6 of any kind of man :D )