Arise and Shine Forth

For the past 6-8 months 3500 youth from 33 stakes in northern Utah have been putting blood, sweat, tears, and about a million rehearsal hours in the the “Arise and Shine Forth Youth Spectacular.” All that effort culminated this Friday and Saturday night as they performed at Weber State’s football stadium.

Well, on Tuesday July 13th Mike and I took the kids to the Dress Rehearsal. The program was put on up at Weber State on the football field. . It was amazing. It was more than amazing The spirit was amazing and I have to say I was in tears the whole time. The first council had the job of portraying the "pre earth life". They did an amazing job. The way that they told the story both visually and musically was JUST UNBELIEVABLE. In fact when they got to the point where they showed how some chose Heavenly Fathers plan while some chose Satan's Isaac looked over at me with tears in his eyes and said "but Mom......that's so many! Why did so many choose that way? They gave up their chance! Their ONLY chance!" It made it real for him. Each person represented a REAL spirit to him and he realized (on a smaller scale but still huge to him) how sad it really is. 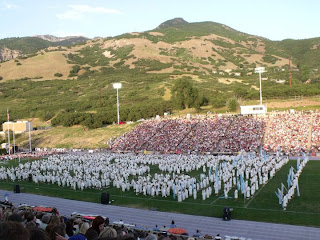 ANYWAY, the second council had "earth life". There was a lot of really fun dancing and music. And really fun props!

Our "council" had "Missionary Work". Each stake had a different country or continent, and they told a missionary story and then did a dance from that area. Our Stake had South America. They did such a great job. I was so proud of them! During this part there was a talk from Elder Holland played up on the Jumbo Tron, and in it he talked about how (to paraphrase) it's like we're all here on earth playing a game that's already been won and we're down here still trying to decide which team to be on! There IS a winning team and it was amazing to see so many kids who realized that! 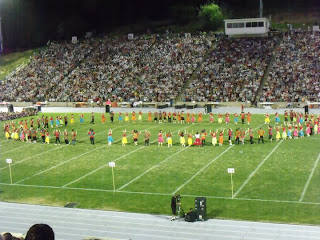 The finale was breath taking. ALL 3500 kids were on the field, doing choreography AND IT WORKED! The Ogden Mission Missionaries and President came onto the field and all together they sang called to serve. Then, everyone on the field turned on a little tea light and turned to face a HUGE banner of the Savior, they knelt and they sang. I get goosebumps even now. I was blessed to have been there and my boys were so GOOD! They loved it and I hope that they will remember the lessons that they learned that night and the spirit that they felt. The youth truly did "Arise and Shine Forth" 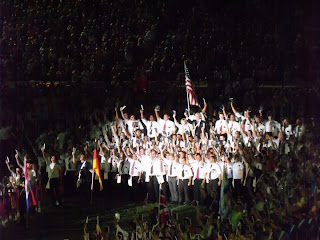 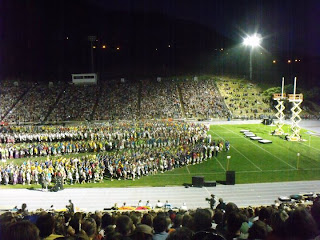 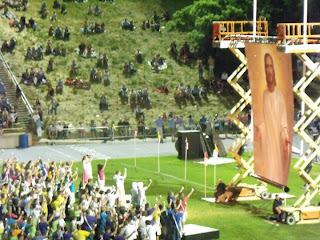