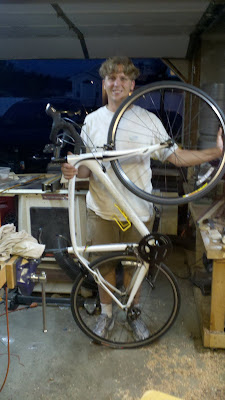 Mike has been saving for a road bike. He figured it would be a while before he could get one, but man was he obsessed :) The other night he was out making Harry Potter wands......of course.....and our neighbor came over. Our neighbor is a bail bonds man and he had taken in a road bike on a bond and the guy was back in jail so he was keeping the bike. He told Mike he would sell it to him for the amount left on the bond...$350...WHAT? The bike is a full carbon frame, Mike's size, and EXACTLY the bike he wanted! Mike asked me if I minded if he bought it (I said HECK NO! That saves us $1,700!!!) and it was his!!! He's like a kid in a candy store :)