One of the best things about the end of the school year is that we get to see the kids in their programs. Last week we had the school play titled "Pirates the Musical". 3, 4 and "selected 6th graders" did a great job! Matt made a GRRRRRREAT Pirate! The songs were fun and I just love watching Matt try to stay serious! 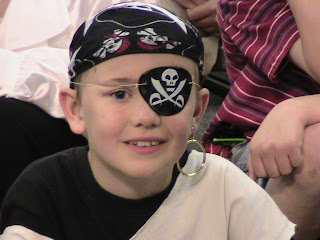 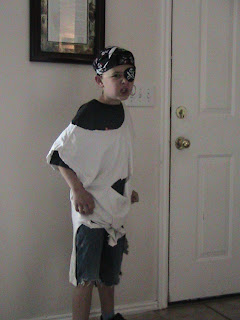 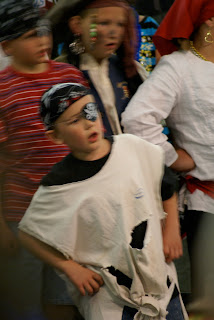 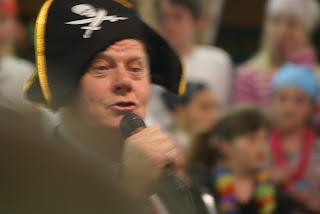 The next night we had the 5th grade program. It was a WONDERFUL patriotic program honoring all of our armed forces. Tyler and the other 11 year old scouts in our ward got to do the flag ceremony. Tyler got to call it out. I had really fun pictures on my camera but the camera dumped all of the pictures grrrrrrrr. Oh well Imagine the cutest scout ever and you'll get the picture! 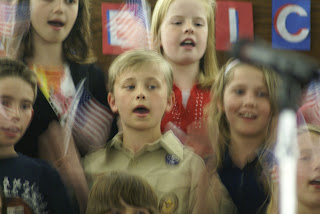 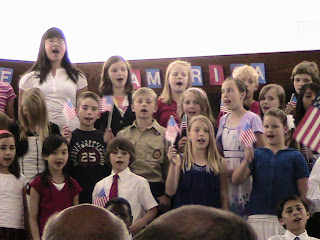 One of the really fun things that the teachers did in preparation for the program was ask the kids to find pictures and stories of family members that have/do serve in the armed forces. This was a really fun project for Tyler.

He called Don and asked for pictures of him and his dad. Don was an Army Helicopter pilot in Vietnam, and his Dad was a Marine in WWII. In fact he was in the Philippines when the Japanese attacked. As a family we've listened to the "Children of the Promise" books and the boys were VERY touched by the part about the Bataan Death March. So learning that Don's dad went through that really touched them.

Mom got us a Picture of Grandpa Ridd from his "enlisted time". Lucky for him the timing was such that he got through basic and was in his special training when the war ended! 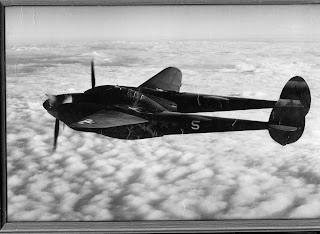 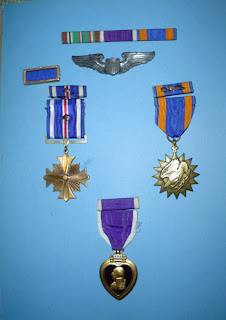 Here's what Michele sent me:

Opa flew a P38 fighter plane. He was in the European Theater of War. He was stationed in Italy, I believe it was Sicily. He was shot down over Italy and plowed up an olive field which the US government had to replace. A recon plane got a picture of Opa climbing out of his burning plane and crawl over to a tree. That is how his life was saved. They sent men in to recover him and took him to a hospital somewhere over in Europe, I believe Italy, to recover. I do know that he was stationed close to an opera house in Italy, because Oma said she didn't know where he was until he sent here a program of the opera he had gone to see. If I'm not mistaken he also flew over 100 missions. He was also one of the pilots that strafed (once again I'm not sure of the spelling) the oil fields in Germany. Germany was doing very well in the war until this point because they had all of the petroleum they needed for the war. When their oil fields were destroyed their fuel supply was gone and that helped to put them in a tail spin. One other thing that Opa said about the war was that the Germans never hurt him because on his plane he had a picture of his German Shepherd dog on one side at the back and a picture of his German wife on the other side of his plane. He said this saved him. This is basically all that I know about the war and Opa. I do know that he loved to fly.

And Caroline sent me this:

Opa was in the Army Air Force. He fought in what they call the European Theater. He was stationed in North Africa and Barre Italy. He flew ahead of the bombers that bombed Ploesti Oil fields and put the Germans short on fuel. He was in on the mission that liberated Rome. He was shot down in Italy and crash landed in an olive grove. He cracked his spine and was badly burned but survived. We are all so glad! He flew a P-38 fighter plane. He received the Distinguished Flying Cross with oak clusters because of all the missions he flew and he also received a Purple Cross because of being shot down.He was a lt. colonel when he retired.

In addition to these "older" (sorry Don!!) soldiers, we also got pictures of Clerie and my cousin Andrew. I love our soldiers and the sacrifice that they and their families make so that we can all be free, and this program is one of my all time favorites! As they sang the song's for all of the different branches they asked that all people in attendance who were members of that branch stand while they sang. I can't even begin to explain the emotions that I felt. When Don stood I had to fight back the tears. He, his Dad, Opa, Grandpa, Clerie, Andrew are all so important to me. They have served our country and my family! And as I sat there I realized how thankful I am to the Lord for preserving them. Anyway back to when Don stood up. I was so thankful to the Lord for preserving him and sending him into our lives. Ahh the tender mercies. Anyway I'll stop rambling now!
Posted by Liz at 1:38 PM

Love those stories! Will you email that stories and the pics you got?