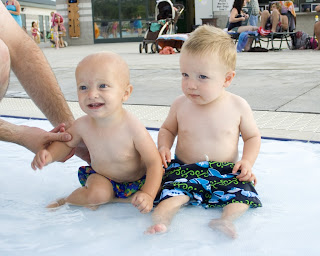 Last night we had the greatest time at the McKay Dee "NICU Grad's summer party. This year they held it at the North Shore Aquatic Center and it was AWESOME! They provided dinner and prizes and of course the entrance. It was made even better by the fact that Mary and Mike were there. Kyle and Nick were both in the NICU at McKay in 2008, so forever we'll get to play at these reunions together! The Chamberlaine (from our ward) and the Woodburry's (Preschool friends) were also there!

Nick had a blast. The others did too, but since this was about Nick I was so happy to see him LOVING it. He had a grin plastered on his face the entire time!

I was a slacker though and forgot my camera! Mary had hers though so As soon as I get pic's from here I'll post them!
Posted by Liz at 10:51 AM