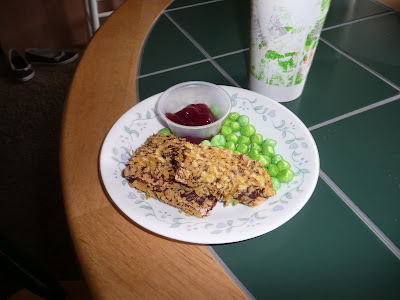 We had a great April Fools Day at the Staten house. It started with "Magic Milk" in the boys cereal. We put several drops of food coloring in the bottom of the bowl and then added the cereal. Then we took the bowls to the table. when we added the milk it magically went from white to blue, red or yellow! Tyler and Matt LOVED it....Isaac ran to the couch crying. I still don't really get why but oh well. Once Lucas woke up he thought it was fun.

Matt switched the cereal bags around.

Tyler got our old copy of Eragon (that the dog chewed up ages ago) and wrote "Fazzio" on it just like his teacher does on all of his books. Then he took it to school and told his teacher that his friend left his book at our house and the dog ate it. For a second Mr. Fazzio was really worried. That second was enough . Tyler has been flying high all day.

Mike thought he was pretty funny too. Not only did he have several people upset about our poor bunny (no the snake DID NOT get out, and Ushi is just fine) but he also did something to autocad at work so that there were weird pop ups when people tried to work.

I (thanks to Jamie) made "fish sticks and peas" for dinner, and cupcakes for dessert. the fish sticks were wafer cookies, frosted and rolled in corn flakes. The peas were laffy taffy balls. We also had seedless strawberry jam for ketchup! Then I made meatloaf cup cakes and mashed potato frosting! The kids were hilarious! The fish sticks and peas were figured out pretty quickly, but the look on Ty's face when he took a bite of the cupcake was priceless. They had no idea. Then they kept saying "This is the coolest dinner ever!!!" 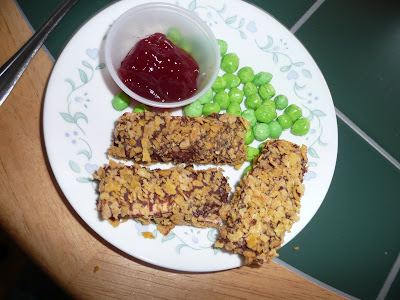 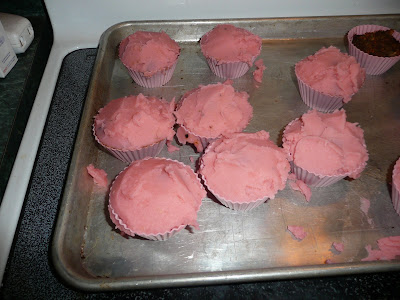 I so wanna steal your dinner idea next year. I'll probably forget, but if not I'm stealing it! Too cute!