The R.A.C.E.R century or the Roy Athletic Century Epic Ride....was my favorite ride we did this summer.  It was my favorite because I got to ride it and train for it with my boys and my hubby and my friends!  We started out with the idea that Tyler would ride it with us for sure and with the hope that Matt would be able to do it too.  Mike was a little worried that Matt's body wouldn't have the reserves it would need for that long of a distance.  We shouldn't have worried!  Tyler and Matt were amazing!  They started training with the plan that they would ride their mtn bikes with road slicks.  THEN Mike got hit by a car while riding his bike (Another post all together), and Danny got his parents to buy him a new road bike....those 2 events lead to Tyler getting Danny's old bike and we were able to use salvageable parts from Mike's bike and put those with a frame that Tom found in St.George to build one for Matt!  They were fast on their mountain bikes but on their road bikes they kicked my tail! Matt lead most of our rides and he and Ty competed on every hill we came to.  Some times Ty won.  Some times Matt won.  I never won LOL.  During the week that Mike and Tyler were at scout camp David Frandsen and I took Matt and Angelo and Logan and Sophie on a training ride that went from here to North Salt Lake and back.  It was supposed to be about 70 miles but when we got home it was only 63.  Matt was determined to make it 70....so he and I went and rode the river side trail until we finally ended up with 70.  The kid's a machine!

ANYWAY....back to the century ride:)

The night before the ride we had a fun dinner at our house with everyone that was riding and their families.  Yummy pasta, chicken and other yummy stuff.  Then it was off to bed and hopefully a good nights rest!

Our morning started out early again and Michelle came to take care of my kids.  She's a saint for sure!  She took them all day and even came and met us at one of the rest stops!  Of course her son was riding with us so I'm sure that helped:) Mike, Tyler, Matt, Logan and I rode our bikes to Roy High where the ride started.  We met Emily and David, Broc, Angelo and Joe Porter there.  We all posed for pictures, danced a little for Mikes video and got on our way!  It was such great weather!  For the middle of June I was really worried.  The heat isn't my favorite.  BUT instead we had rain clouds!  We flew to the first rest stop where Jamie and Allyson (Broc's mom) met us.  It's so fun to roll into a rest stop and see people you know! 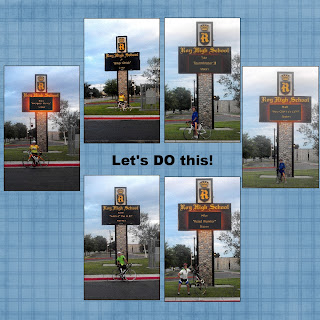 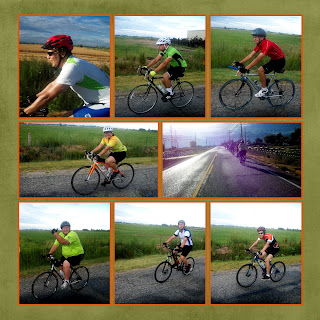 Then it was on to the hill climbing.  I wasn't to stressed about the climb because we had just done it the week before.  BUT it's really not my favorite thing:) Mike and Ty and Matt decided to burn up the hill.  They flew so fast!  David and Angelo and Logan were faster than me and Emily too BUT oh well we made it! 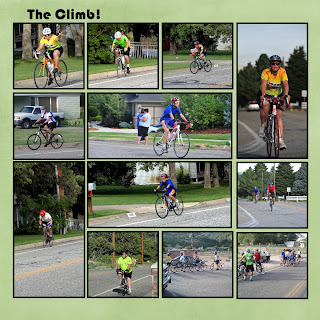 They we got to enjoy the down hill!  Phew!  Then it was out to Layton and out west by the lake.  We ate lunch (visited with Jamie and Amanda and the girls) and then rode into Kaysville and back to the rest stop by the lake and were met again by more cheering fans! It was so great to see the kids but OH Nick wasn't happy that I wasn't done.  Poor kid!  About this time I was.....tired.  We were at 85 miles and still so far from home!  And then the rain started.  At first it was just a sprinkle.  Then it was a pretty steady drizzle.  Then it was a DOWN POUR!  As I rode I could feel the water sloshing back and forth in my shoes.  I had to stop in Hooper and wipe the mascara off of my face because I couldn't see!  Bike computers got so wet they stopped working.  It was nuts....but it wasn't hot!  Everyone else on the ride took the SAG vehicles back.  Once again we wouldn't quit.  So we had a SAG vehicle in front leading the way ( we couldn't see the markings anymore) and a SAG vehicle behind us (so we didn't get hit) and we kept on a pedaling along.  Best SAG support every by the way!  We hit 100 miles and were  still in West Haven and I wanted to quit.  I'd finally proven to myself that I could do 100 miles and I was beat up!  Mike said I could but that he and the boys were going to finish.....well of course I couldn't let my boys see me quit so on we went.  We turned onto 1900w off of 3300s and I realized that we had to ride up that stinkin hill.  I wanted to cry.  I didn't but I wanted to.  I had to just put my head down and pedal.  It felt like one of the hardest and longest hills on the planet.  In reality it's not even categorized:) We made it though!  And then.....we had to ride up the hill from Sandridge to Roy High.  Again the biggest hill ever!  Not really but UGH! 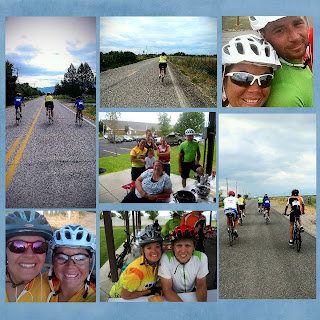 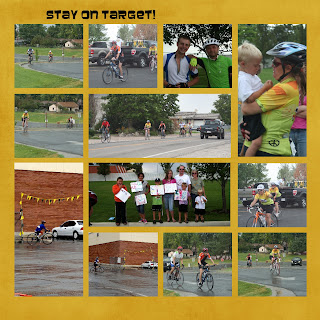 The ride organizers felt so bad for us and also proud of us for finishing that they fed us the post ride meal even though we didn't pay for it.  That was one of the best hamburgers I've ever eaten! 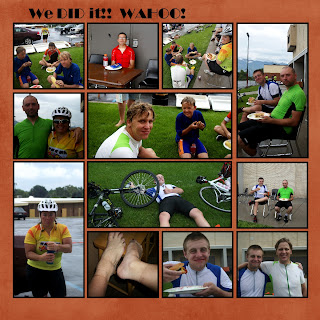 I'm so thankful to Mike and the Boys and my wonderful friends for this amazing ride and the memories that will last a life time!
Posted by Liz at 6:27 PM