I don't know if I have ever been so excited for the family January birthday party. I know that it will seem like I was excited for MY presents, but really I was SUPER excited for Mike O's present! A few weeks ago our neighbor (a bail bondsman) stopped by with ANOTHER road bike and it just happened to be the right size for Mike O!! Mike was THROUGH THE ROOF with excitement! Not only would he gain another biking buddy....but he was SO excited to give something like this to Mike O. As we were talking about it he said "There is honestly no one that I know who gives so much of themselves for EVERYONE else around them. I can't wait to give HIM something for once. There is nothing better than giving an unexpected gift to the most deserving person!" Anyway, Mike called all of my family members and asked if they wanted to go in on the bike with us for his birthday....and everyone was super excited to help!

So tonight we all gathered together for a yummy dinner (Mike's home made pizza), cake and then FINALLY it was present time! The excitement in the air was palpable. My Mike made me open presents first so that the bike could come at the end:) As a quick non-bike side note....I loved my gifts:) Mike gave me the new bedding for our room! I can't wait to get the painting done! Mary (and family) gave me a dress that I had almost bought for myself the week before BUT didn't because I didn't want to spend the money on myself! You've gotta love sisters! Stephen and Melissa gave me a beautiful necklace that Melissa made (she's amazing!) and my Mom and Don gave me a cool attachment for my kitchenaid mixer that will grate things! 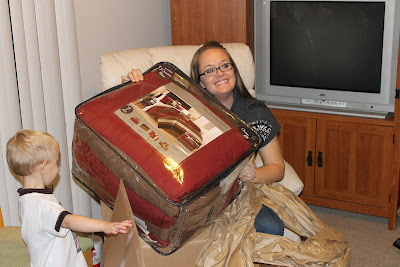 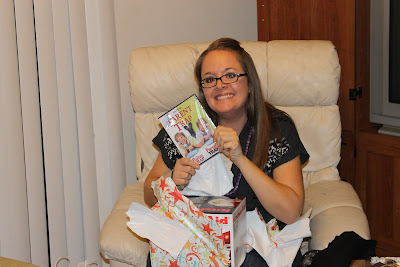 Ok...now on to the exciting part of the night. Mike's present. We gave Mike a little bag with clipless pedals.....he was a little less than thrilled. He didn't say anything but I'm sure the thoughts were "HUH? I have no desire to clip my self into those little things!" ANYWAY, then Mom handed him a card and said "We're still trying to decide what to get you". hehehe. Then Mike had him close his eyes while he brought out the last present. Everyone was standing around with cameras all pointed at him and he suddenly got very nervous. It's not like we have a full paparazzi every time someone opens a gift:) Mike got all set up with the bike and told him to open his eyes but Mike O was so nervous he didn't want to look! He finally did and said "Oh ahahaha Mike funny. Your new bike?" My Mike said "nope, this is for you!" I haven't ever seen someone so excited, shocked and confused all at the same time! It was awesome! BEST gift giving experience ever. 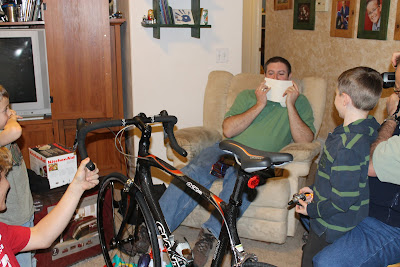 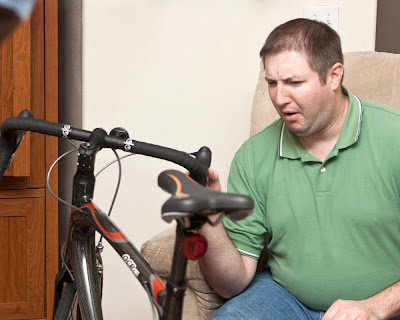 And of course we had yummy cake! 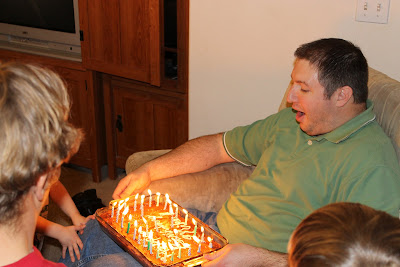 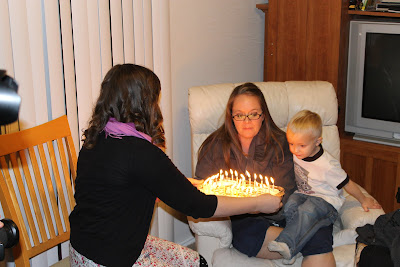