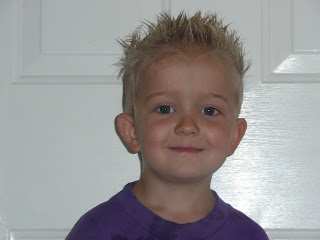 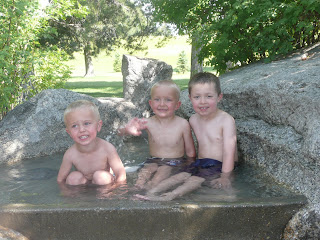 I cannot believe that Isaac is 5! I swear time is moving faster than ever before. Isaac has the most amazing laugh. In fact a few weeks ago we were looking up the meanings of the boys names and were all surprised to learn that "Isaac" means "He Laugheth" . Mike and I were shocked, because if anyone fits their name it's him! His belly laugh and cackle are contagious.

The boys all had to write their talks for the primary program and Isaac's topic was
"What Jesus has done for me". I asked Isaac that question and he said "Well, He dropped lot's of drops of blood for me in the garden of ....What was it? Gethsema what? Anyway in that Garden. And he did that so that when I do things wrong, cuz I do, I can repent and fix them. And that way I can be with Heavenly Father and Jesus and you forever." I asked him if there was anything else that he could think of and his answer made me laugh. He said "Well duh, what else would matter as much as that?" and then he said he needed breakfast and ran off. It was a good mom moment.

Isaac moves at breakneck speed. everything is fast. morning to night. When he answers the 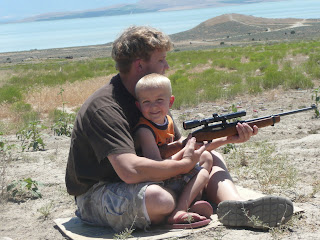 phone, if he can see me, it usually goes like this: "Hello? Yeah but this is Isaac." (at this point he'll usually answer 1 and only1 question.) At which point no matter what the person on the other end is saying you'll her: "Ok great well you can talk to my mom". It takes too much time! Now if I can't be seen he'll try to take a message, which can be an interesting conversation to listen too!

Isaac is also sweet and snuggly. This morning he was holding Nick and he slid his arm down into the blanket and told Mike "I have my hand like this so I can keep him. This way he can know how much I love him." Then he told me that Nick kept fussing but that he just rubbed his head 3 or 2 times and then he calmed down because he knew that Isaac was there to help him. Isaac is a great big brother. He's also a great little brother. He lives for 3:20 because that is when Tyler and Matt walk in the door. Isaac and Lucas battle a bit, but they also fall apart when the other one isn't there.

Isaac is a special and wonderful boy. I adore him and am so thankful that he's mine. He's named after my wonderful Grandpa LaMar Day RIdd. Grandpa has the same beautiful blue eyes as Isaac, and the same big and loving heart. I hope that Isaac can grow up to be like Grandpa 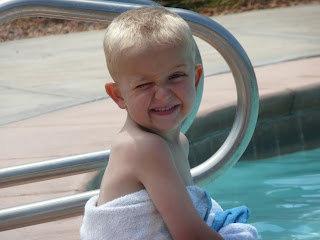 Happy Birthday Isaac! I love you!
Posted by Liz at 8:49 AM

What a cute boy he is! Isaac keeps things exciting! We sure love him!

I love that spiked hair! Isaac is such a cutie! He certainly will keep you on your toes for a long time.
Sara laughed when she was told she would have a baby at 90 years old, hence Isaac was the name of the baby. Just goes to show all things are possible with the Lord.