Welcome to the Family Nicholas!

Well, here's the story:
Liz goes up to the relief society retreat, after I have told her she really needs a social break before she's trapped at home with the baby. She had a great time - watching sisters doing back handsprings and talking about all the boys they've snogged who are now neighbors in the ward...Of course, she was having contractions the whole time. When people noticed she was sweating and shaking they all showed great neighborly conern and love and she decided she'd better come home. She got in the car and Kami and Jamie (friends) started driving her home. At least until the sheriff flagged her to stop and the EMT's loaded her in the ambulance. From there it was a fast ride, lights on and hugging the curves, down I-84 to McKay Dee hospital where I met her (first picture). 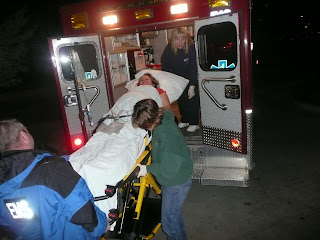 So that was now Saturday morning, about 2:00.

They checked her and said the baby was on its way and we got settled in for the waiting game. We knew it would be a while, since all of our other kids had taken plenty of time to come.

At noon then on Saturday they broke her water and then the real fun started. Liz did great - she's awesome. Nicholas Stephen Staten was born at 2:07, weighing in at 7 lbs 11 oz (nearly our smallest baby) and 19.5" long. 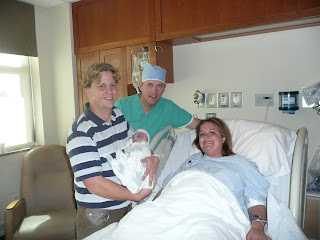 He had a lot of purple on his head and extremities. The nurses told us it was bruising but it became obvious to me and Liz that he was struggling to get a good breath, and he started looking pretty grey.

He wouldn't nurse because he couldn't breathe, so after holding him for a few minutes, they whisked him off for his bath, which made him scream plenty and start turning the right color o 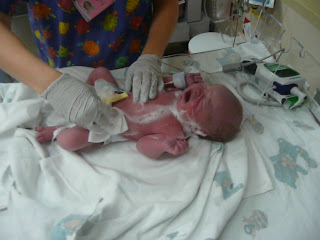 Feeling a little more comfortable, I left him there to be taken care of so I could go back and high-five my wife for a job well done. We got a call an hour later that his oxygen levels were low, and they needed to intubate and take him to the NICU.


Soon we got to go see him at NICU. It was hard, since all our boys so far had got to avoid that experience. It was hardest on Liz, not being able to hold and nurse her little one.

Family and friends came up to see him, and help us with our other boys, so a big THANK YOU to all of you. 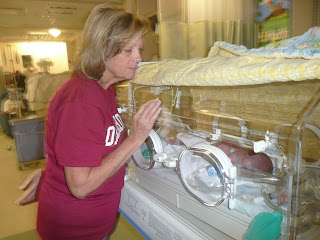 He didn't do well on the normal ventilator - there was too much thick fluid in his lungs. They gave him surfactant to reduce the surface tension keeping the smaller passages stuck shut, which helped, but in the end, they had to switch ventilators to one that does twelve puffs per second, keeping the pressure up in the lungs, and he responded great to that. His blood oxygen levels went right up to where they need to be and his chest x-rays are great. They put in a picc line (like an IV but it goes up along veins to near the heart) so they can give antibiotics and take blood samples, and he stabilized.

The latest news is that he's back onto the normal ventilator now, and getting stronger so it's only a matter of time till he comes home.

It's been hard on Liz not to get to hold him, nurse him, etc. But we know it could be worse - the other babies in NICU are teeny and so much more on the brink. With ours it's only a matter of time till he's joining us at home, keeping us up at night, going through diapers like they're going out of style, spitting up, screaming, and my favorite part: NAPPING ON MY CHEST SO I GET OUT OF DOING CHORES.

Liz is being discharged today, and is going to stay at the hospital for a few days, coming home for dinner and then going back to be there for the baby. The boys and I picked 9 bushels of peaches this morning and now we get to can them this afternoon, and then try and get everything ready for the baby to come home, since this is four weeks ahead of when we had expected him.

Thanks to all for love, prayers, meals, babysitting, chauffeuring and everything else you have and continue to do for us.

He is so cute! Congrats!

Welcome to the world little one. He is so cute! Congrats Liz & Mike! You let little Nicholas his Aunt Kami is sending him some of her "Magic Powder". He can share with his brothers.
Love you all!
Uncle Glade & Aunt Kami

I'll add in my congratulations again, even though I've seen you guys plenty. =) He's so cute and I'm sure he'll get to come home soon. I'm just glad we could give you a little NICU "test drive" a few months back. We're always here to help, so if there's anything we can do we'll be happy to do it. Nicholas (and all of you) are definitely in our prayers. Hang in there guys. =)

Congratulations guys! (This is Kevin's wife Katie) What a darling boy--a perfect addition to the rest of your darling brood!

Give Liz a big hug for me. Our 1st little guy had to be in the NICU for 10 days. It is just awful. Even when you know they are going to be ok, you can't relax until you have them home in your arms. I'm so sorry you all had to go through that.

As soon as you can, bring little Nick and his brothers to AZ to visit his honorary cousins Clark and Henry! We can all be "boy trapped" together!

He is Beautiful! Congrats. What an experience for that little one.

Love you guys. He's beautiful. PLEASE call when you need something.