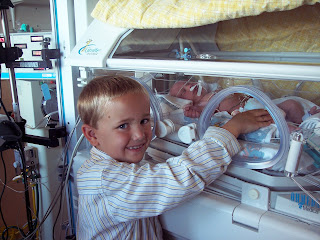 Sorry I haven't had a chance to update the blog for everyone who wants the latest news (until now anyway). Between trips to the hospital to see Liz and Nick, doing all the things moms normally do (which is enough to keep anyone busy), and then the fact that our peaches had to be picked and canned before they spoiled, and then trying to get the things done that we had planned to be done by Oct. 10 for the baby to be born, it's been a busy week. People laughed when I started giving away bags of peaches, because I didn't want to can them all. Call me crazy, but I really think 100 bottles of peaches is enough for my family this year. 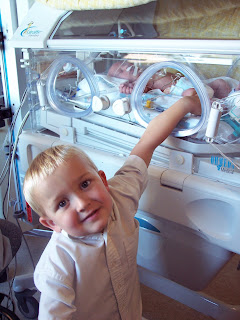 We're having fun with a malfunctioning digital camera, film that needs to be developed, and relying on friends' and family's cameras when ours are being buggy, so the picture flow isn't up to date. Here are some pics from Sunday when Matt and Isaac visited Nick (Ty and Lucas weren't allowed in because they were sick).

Nick was a little jaundiced for a while, but he got over that pretty quickly. The boys thought the Mr. Incredible mask was pretty cool though. 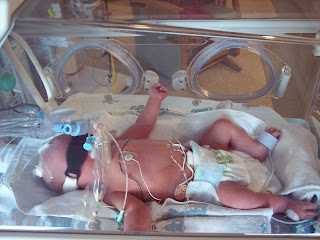 So the reason you're here: News regarding the family:

Sunday after his visit, Isaac started feeling sick. We'd taken Tyler in to Wee Care clinic in the morning and he had strep. We took Isaac in then after church and yeah, he had strep too. We called our regular physician and he said not to worry, that strep can't be contracted by kids under 12 months and is really rare under 18 months. He said to be glad it wasn't a virus. 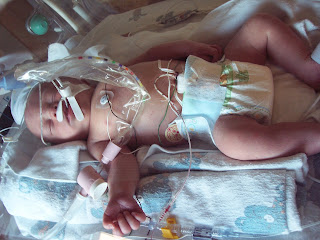 Monday we picked peaches and it looked like Nick was doing better, having switched to the less intense ventillator. Liz was discharged and stayed "boarding" at the hospital to be there for Nicholas. That's where I left off on the last blog entry.

Monday night the boys all got to finally see the baby - they were symptom free and on antibiotics so we figured we could risk it, since the baby couldn't get strep anyway. It was fun for the boys to touch his leg and see their brother. It was a first time our family of 7 was all in the same room.

We went home, I put the boys to bed, and canned peaches till late. Tuesday morning guess what I did? Yeah. Canned peaches while the boys were at school and preschool. Then I went up to bring Liz lunch. I got there and she was in with the baby crying. Nick was back on the puffy oscillating ventilator again. Later that night I asked the respiratory therapist why he thought Nicholas had backtracked. He said it wasn't backtracking, he just wasn't ready for the lower pressure of the slower ventilator - it was gradual, but his lungs started filling with fluid and smaller passages started getting stuck shut again. The doctors said it was viral pneumonia that he somehow contracted in-utero. I guess that cold Liz had last week was more of a problem than either of us could have guessed. I'd never heard of viruses crossing the placenta, but obviously it happens, and THAT is why she went into early labor, not laughing till she cried at the relief society retreat at high altitude.

Liz's milk came in just as they stopped the oral feedings for Nicholas because his stomach was full and stuff wasn't moving through. Then Tuesday night when we went to dinner, Liz started hurting really bad - she couldn't lift her fork to her mouth. And since we had been released from the hospital the nurses couldn't even so much as comment on what might be wrong without us checking in at the ER, where there was about a 3-hour wait with sick people filling the waiting room. SO instead I went to a pharmacy where they suggested we try a heat rub in case it was muscle pain. That helped, a lot. Eventually we got the resident physician to come and he agreed it was muscular. It was highly stressful for a few hours there, with the baby not doing better, seemingly worse, and Liz in so much pain not knowing what was wrong. We missed grandma's surprise party, though our boys still made it there. Then, to save our sanity and help us out, Grandma came back up with the boys to stay the night! She has no idea how she saved us!!

So yesterday morning she tackled the mountain of clean laundary, folding and putting away. I finished canning peaches, and Liz decided that she's had enough of the hospital stay and came home. The boys at home needed her. Things are much less tense now. We really miss Nicholas, and want nothing more than to be able to hold him, change his diapers, feed him, and hear him crying, but at least it doesn't feel like life is falling apart around us. It's funny how suddenly children waking up and getting in our bed with mom is welcomed after not having that option for almost a week.

So if you want to help, please pray for our little one, and thanks for the calls, emails, texts, and other expressions of love and support. Hopefully we'll have more and better news soon. Thanks everyone!
Posted by Liz at 8:46 AM