So I was a little, ok a LOT, nervous at the beginning of the summer about riding 100 miles.  After Little Red though I wasn't to worried.  My feelings went from terrified to excited and a little nervous.  Oh what a false sense of security.  The day started out great.  I felt great!  I was excited to do a ride that benefited diabetes.  I was excited to ride with Mike, Mike O and Travis.  I was excited to ride for Mary, Melissa, Travis and my Dad.  I was also very emotional about it all.  I missed my dad greatly. Anyway, the day started out great.  We left really early.  I felt great.  We got to Brigham and check in went smoothly.  I should have known :)

The starting line was awesome.  The Red Riders started out first and it was so fun to cheer Travis on:) The first 2 legs of our ride were so easy.  I was still full of excitement and that false sense of security.....At each stop we decided to talk about one of the people we were riding for.  At the first stop Mike O talked about Mary and her Diabetes story.  At the second stop Mike talked about Melissa.  These parts were honestly the best parts of the ride. 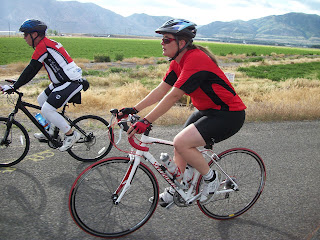 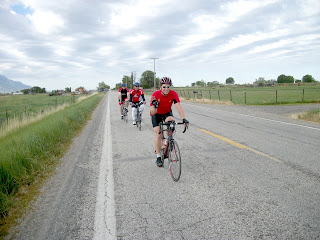 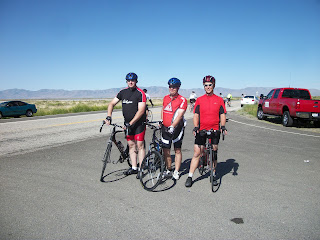 As we left our 2nd rest stop we were all feeling good and moving along well....Then we came around a point and hit a wall of wind.  The wind was horrible.  I haven't ever ridden into a head wind like this before.  The wind speeds were on average 30mph.  I wanted to die.  We struggled on.  I lost a contact and had to put my glasses on.  Did I mention that I wanted to die? We were the last 100 milers to roll into the third stop. Not a great sign.  At this stop Travis talked about his experience with Diabetes and the changes he'd made in the last 6 months.  With surgery he's dropped like 80 lbs!  Way to go Travis! 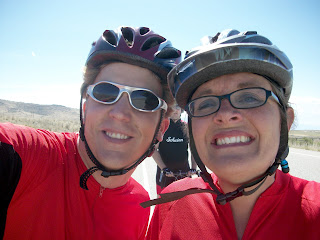 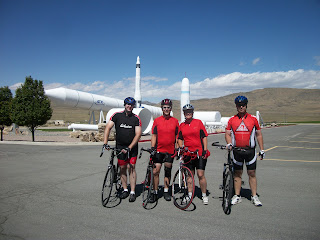 I would like to say that we took off and flew like the wind...but in reality to took off and fought the wind in a way I hope to never do again!  At one point I was riding down a hill with Mike O and we were riding as hard as we could and we were going 12 miles per hour!!!  So we rode about 20 miles that way...and then hit the climb.  I was already worn out and NOW I had to climb?  It was a categorized hill.  It was a level 2 hill.  I really wanted to quit and cry and cry while I quit.  But my German stubbornness wouldn't allow it!  I was SLOW.  And I had to stop a lot.  BUT I finally made it!  I was glad that Travis rode in the sag truck though:) that way I have video of the end of it!  After that the down hill was AWESOME! I had the guys go on ahead since I knew that they would go faster than I was comfortable.  They went down at speeds of about 50 mph.  I only was upwards of 39:)  BTW on the way down Mike O had guardian angels FOR SURE!  He must have hit a bump or something because the band in one of his tires was broken!  At those speeds he could have been totally messed up!  Thankfully he wasn't!  (We were even able to find a new one for him at our last rest stop!)By the time we stopped at the next rest stop though I was in a full asthma attack.  No one had anything at that stop so I tried to roll on.  Before long it was worse and my Achilles was KILLING me and I didn't know what to do.  We had another little hill to climb and some how ....with only one stop I made it.  Trav took a cut off and went to wait for us at the lunch stop.  We went on.  Finally it became to much for me.  SO Mike O rode on with a ride marshal and Mike and I took a slight short cut to the lunch stop.  Oh how I wanted to die.  I couldn't' breath and Mike couldn't find anyone with an inhaler....but Travis wasn't going to give up:) he asked every single person until he found one!  It sorta helped.  As the girl who it belonged to, was leaving she came over and asked me to use it again LOL I guess I looked bad!  With lungs that finally were opened up, a wrapped ankle and a Mike O who had finally fought the wind to get to us (and rested and eaten) we got back on our way.  Everyone else at the rest stop was sagging.  It was just to windy!  But we pressed on!  When we were riding into the wind we were leaning sideways just to stay up.  When it was at our backs were flying along at 25-30mph without any  work! It was just ridiculous!  The great ride marshal stayed with us the whole time.  She was GREAT! 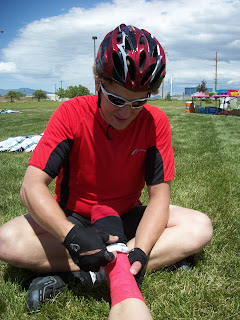 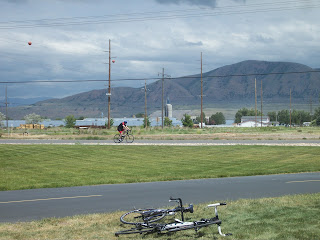 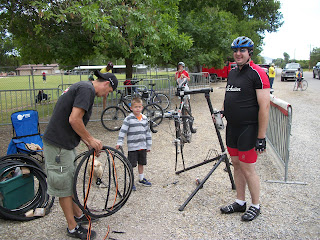 We FINALLY finished and were met with the greatest cheering squad ever!  Mary and Kami brought all of the kids up!  I was fighting tears. I just wanted to die and some of the pictures totally show that!  The weather was so bad that our post ride meal wasn't there!  They had all packed up!  GRRR!  So we all piled into our cars and came to our house for pizza!  I was so cold and really a little bit shocky.  I couldn't stop shaking.  I can't say that this was the best ride ever....but it's one of my most memorable! 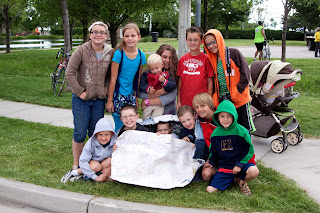 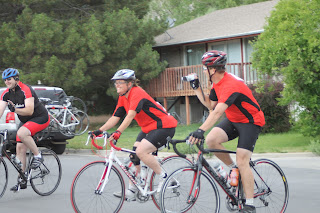 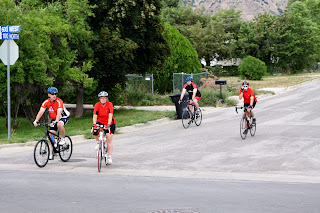 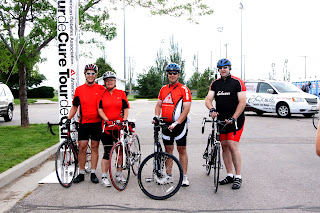