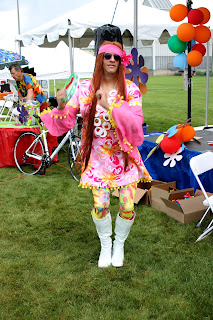 I have been so excited for this ride.  Excited and terrified.  I've never been on a long ride without Mike.  When I registered for the ride (which BTW sold out in what felt like seconds!) my friend Jaunett was going to ride with me and she wanted to ride the 80 mile distance.  So that's what I did.  Then she backed out due to some health issues.  I was going to be alone!  UGH!  I was feeling pretty stressed but then my crazy and nutty friend Emily decided to get a bike and ride with me.  She'd ridden 30 miles before the little red ride.  she's just that awesome!

SO we all went up to Logan on Friday afternoon and set up camp. We had a great dinner and Mike gave our bikes the royal treatment.  OH I was so stressed!  What if I got a flat?!?  What if I crashed?!?  So Mike got all of our phones linked so he could track us and he promised me that he would track us the whole time:) I could finally breath and try to sleep!  Mike and I slept in the trailer and the boys slept in the tent....well I tossed and turned all night but I tried to sleep! 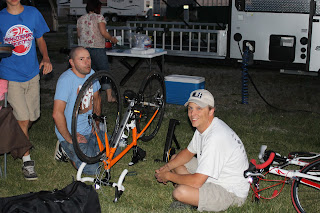 Morning came quickly and after a quick breakfast we headed to Lewiston and the ride!  It was a total party!  People everywhere and hippie decor like nothing else!  My boys personally loved the dude dressed up like a lady.  There was swag galore!  I have enough chap-stick to last me a life time. 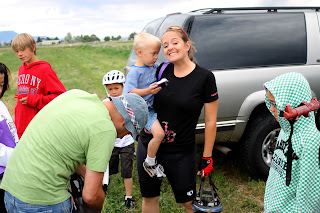 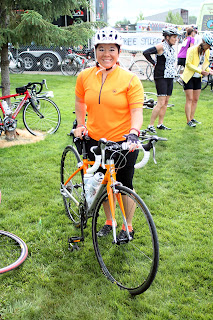 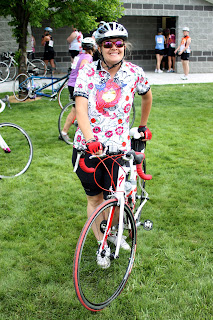 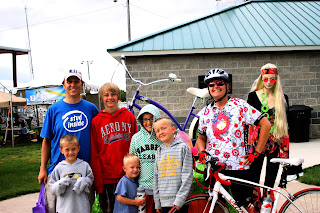 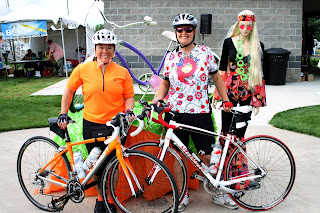 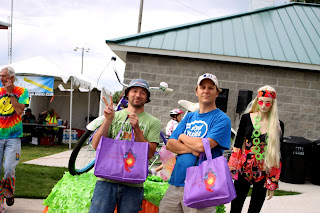 It was finally time to leave and so Mike and David and the boys went to the starting line to cheer us on....except for Nick. He cried and cried! I was almost there with him.  OH the stress I felt!  It was such an exciting, stressful time!  I love riding with Emily.  She's fun.  AND there is always something to laugh about with her. We got in with a group of women as we started that were....well....INSANE!  They had  a leader named Gigi.  And by leader I mean "insane, nutty, LOUD" person telling everyone what to do.  Every stop sign she'd yell "STOP!"  every time we saw gravel she'd yell "GRAVEL" .....she was even the motivator of the group with "COME ON GIRLS!  PICK UP THE PACE!  YOU CAN DO THIS!!! GO GO GO!" It was a bit much.  We finally hah had enough and had to drop back and get away from them.  And once we did we couldn't stop laughing.  WOW.  Some people take their riding very seriously!   Emily learned something very quickly.....the first 10-15 miles of a ride are the hardest.  She kept asking how much farther :) and then all of a sudden we were at the first rest stop and she relaxed.  I don't think she realized how nice supported rides were.  Those stops pop up right as you need them!  ANYWAY, our boys were all there cheering us on as we pulled in.  A quick potty stop, a few treats and run down of the ride "thus far" for the guys and we were getting ready to take off when one of the workers dogs got loose....and chased down some baby birds and ate them!  Thankfully the kids were busy playing on the old school play ground to notice!  It was hilarious!  On those poor birds! 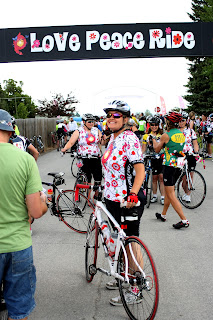 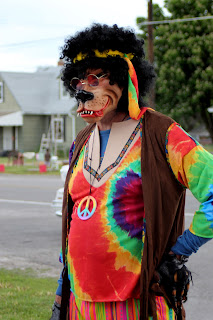 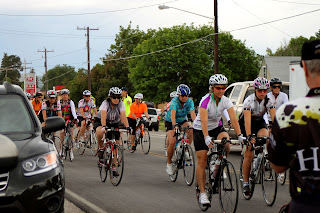 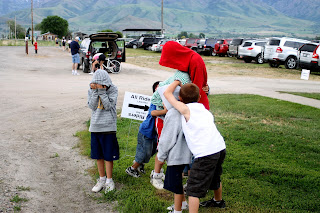 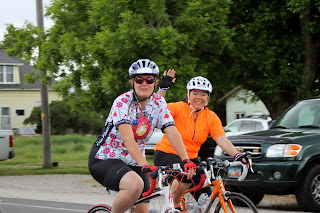 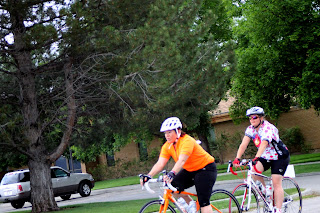 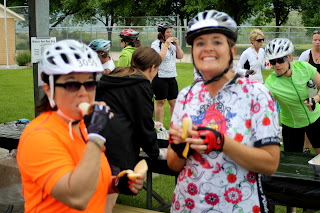 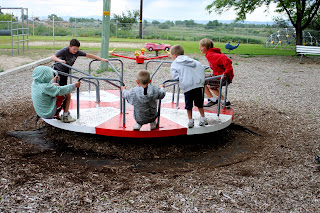 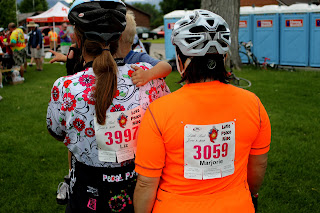 Our second leg was a lot easier and a lot faster:) We both felt like we were flying.  I loved it!  We refilled at the second stop and headed off to our lunch stop.  We rode so fast in fact that Mike and David and the boys (who were at the little Logan zoo) had to hustle to meet us at lunch.  We actually got there first!  Lunch was great but we stopped to long.  The kids were so cute and it was so great to see them.  I even got my legs rubbed:) 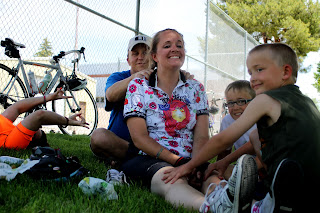 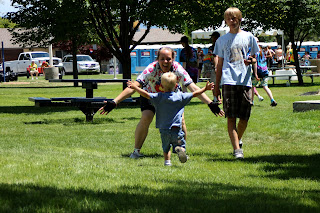 Then it was off again.  We were slow during the next leg.  Lunch digesting and all that.  It was getting hot again and I wasn't sure about this whole thing:) BUT we made it to our next stop, refilled and got on our way.  At this point it was just a matter of finishing.  Thankfully the storm rolled in again and the temps dropped a little.  The rain was nice.  OH so nice:) 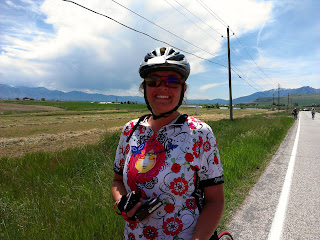 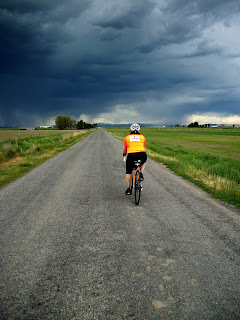 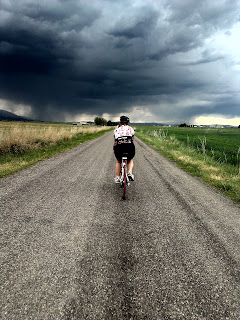 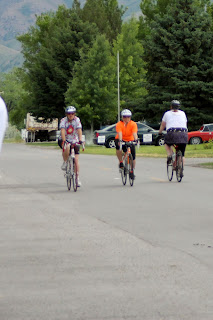 The route was a little short and we rolled in to the finish line early and we were both so confused that we didn't even see our families!  It was so funny, but WE MADE IT!  We FINISHED!!  Thanks SO much Emily for riding with me!! And thanks Mike, Tyler, Matt, Isaac, Lucas, and Nick for supporting me! 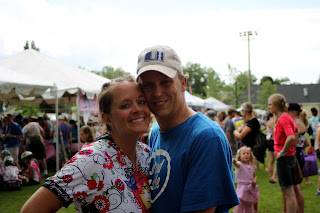 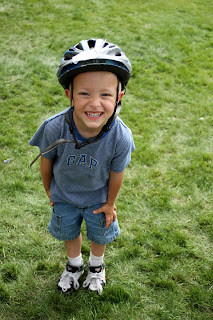 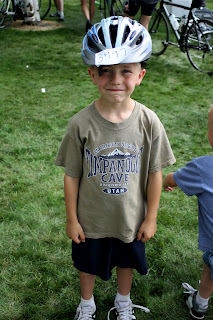 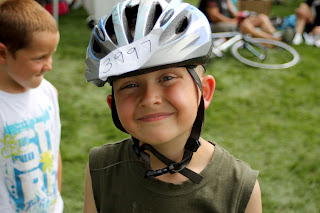 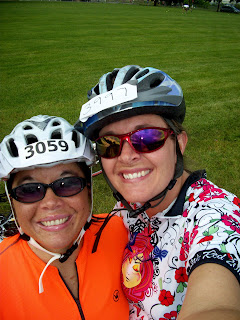