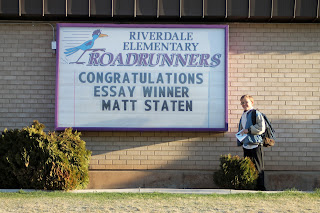 I feel like I say that all the time!  Matt kills it at everything he does, and his essay about his day at the capitol won 2nd place (there wasn't going to be a second place but his was so good they made one!) !!!!!  I got a phone call from the school saying that there was going to be a little awards assembly for Matt and that Rep. Dee and his wife were going to come and make the presentation.  Matt won $250  for his teacher!  I'm always so impressed with that kid!! He was so excited!  The school even said congrats to Matt on the Marquee and the city news letter mentioned it in the city newsletter!  This has been such a great opportunity for Matt and I'm so thankful to his teacher for choosing him and to Rep. Dee for coming up with such a great idea! 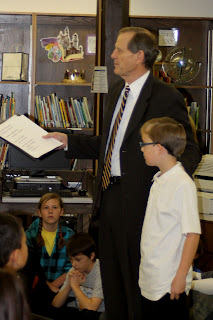 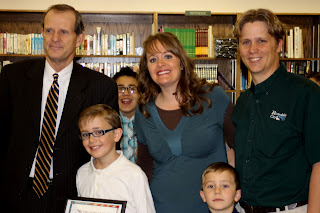 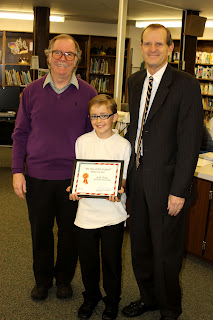 My Trip to the Utah State Capitol
By Matthew Staten, Riverdale Elementary
State government is very important. Without it, our state would probably fall apart. In our state, we have three different branches of government. They are the Legislative branch that turns the bills into laws, the Executive branch that enforces the laws, and the Judicial branch that interprets the laws.
When I took a trip to our Capitol Building down in Salt Lake, I learned many things. I spent my time on the second floor, which is where the Legislative branch belongs. The Legislative branch is divided into the House of Representatives and the Senate, and is where laws are made. A law starts out as a bill which is a statement made by someone in the house or senate. Bills get talked about in committees for some time, maybe even for a few years until they think that it is good enough to be sent to the house or senate to be voted on. If there is a majority vote in both the house and the Senate, then it gets sent to the governor. Then the governor decides whether or not he likes it. If he likes it, he signs it. If he doesn’t like it, he doesn’t sign it. Then the governor sends it out for the people to read and hopefully obey as a law.
I got picked by my school to spend a few hours with my Representative in the House of Representatives. His name is Brad Dee. He is also the Majority leader for the Republicans in the House of Representatives. I was the only fifth grader in my school to go to the Capitol. When I got to the Capitol, we went down to the second floor. Then Representative Dee took my parents and me to his office. He told me that there were very many bills to go through. He had his intern, Sasha Seegmiller, give us a tour of the first few floors. She showed us a picture of The Gold Room in some pamphlets that she gave us. Sasha also showed us some paintings of Utah’s history, as well as some statues and historic objects. Then we went to look at the House floor before the session started.
This next part of my story is the part of my story that catches people’s attention the most: we went down to his office, got some candy from his little candy store, and went to get some drinks. We got a Coke for Representative Dee and a root beer for me. I think that it is awesome that he has a candy store and that there is a drink dispenser in the building at all. That part was cool, but not the coolest part of my whole trip. After that, we went down to the House floor. In the House of Representatives, the longer you have been there, the farther back you sit. Because Brad Dee is the Majority leader for the Republicans, He is in the back row on one half of the room. He has a big telephone that he can use to call anyone that he wants to. The others just have small ones to talk to one person.  There are 75 people in the House of Representatives. That means that in order to get a majority vote to pass the house, there needs to be 35 votes. Only the back two rows of half of the room are Democrats.  The rest are Republicans.  That’s called a super majority.
I got to sit next to Representative Dee for about an hour while the session was going on. I saw that some bills get put off until they are revised. Representative Dee even acknowledged my parents and me to the house! Until that trip, I always thought that it would be silent on the House floor. I was interested to find that there were many conversations going on at the same time. In one of those conversations that I took part in, Rep. Hughes told me “It’s like a shark tank in here. You don’t want to drop a drop of blood in the tank or else the sharks will all attack it. Talking about your bill is like dropping in more and more blood.”  Representative Dee said that one day, I might be in the House of Representatives and invite him back to sit next to me while I vote. I was interested to find that the current Speaker of the House is the first female Speaker of the house in Utah history.
After we did that for about an hour, we went back to his office and talked a little about some past things that he has done that affected my city. When the time came, he would go down and vote, and then come back. Then we went and looked as the Senate acknowledged and given medals to the same people who got recognized for saving some people’s lives. I got to see those people in the House of Representatives and the Senate!
Well, to wrap it all up, I went down to the gift shop and got an art book, then went to Crown Burger for lunch. All things considered it was a pretty great day! I learned not all politicians are always just serious. They are just ordinary people who want to help us out and do what’s right. I will remember this day for the rest of my life.
Posted by Liz at 2:06 PM